All characters were transferred to Bless MU Online project.

It’s been more than a year and a half since we have launched a new server on MUX and now the wait is finally over. We proudly introduce our new Luxor x1000 server without donate shop. It means that there would be absolutely no ready items on sale on our website. This server will be fully compatible with the latest Bless Empire server for possible future merges.

Arkania Episode 5 Part 1 update is a continuation of our global game world overhaul. This time we will have all classic locations Lorencia, Noria, Devias at the same time with their modified counterparts Ruined Lorencia, Jungle Noria and Snowstorm Devias, with Arkania staying as the capital and starting location moving back to original Lorencia. Quest System will get a completely new task layout with new monsters and locations.

And the cherry on top will be the new Lorencia Fortress Event. It will be similar to Kanturu Domination event, where guilds compete for controlling spots and the winner gets prizes, guild-buff and access to a closed location with spots. This location will be the new Fortress in Lorencia, that would be accessible from level 1 after reset and would be very valuable possession for a guild.

All referrals registered from today will already be valid on the new server. You can get your referral link in your personal account by logging into any of the existing servers. So, if your friends are not with us yet, then it's time to invite them to join you at the opening of our new server.

Participate in a Bonuses Giveaway and get chance to win 300 bonuses!
All players need to download Full Fame Client to play!
New Server Luxor x1000 will open on June 10th at 18:00 UTC+2:00!


Author: BeL4eNaKComments: 46
26.03.21 Craft system and items upgrade
You can now smelt parts of the top sets in the craft system on the website: Brave, Hades, Seraphim, Phantom, Paewang. After smelting, from the resulting material, you can again create parts of the same sets. You no longer have to sell useless Brave + Mana to the store, now we have a waste-free production. The cost of crafting these sets has also been reduced.

New sets of Dark Scale and Antique Soul in the special craft section are now created from two items instead of three. The sets themselves can now also be smelted and crafted again in search of suitable options. On parts of the Dark Scale set, the amount of Damage Reflect has been increased from 1% to 2%.

All elemental jewelry can now also be smelted and from the resources obtained, new elemental rings and amulets can be created.

Now, when an item is smelted and it has upgrade levels, those levels will be credited as Jewels to your craft resources. For example if you smelt an item +13 you will get 13 jewels to your resources.

Additional options when upgrading Helms, Gloves, Boots to +14+15 have doubled. Shields +14 now give twice as much HP.

In Chaos Castle, you can no longer push characters with any skills or abilities, this should reduce the likelihood of characters getting into a bug at the edges of the map.

Corrected elf damage buff for Dark Lords and Dark Knights. The set values ​​are not final and will still be adjusted on live servers. 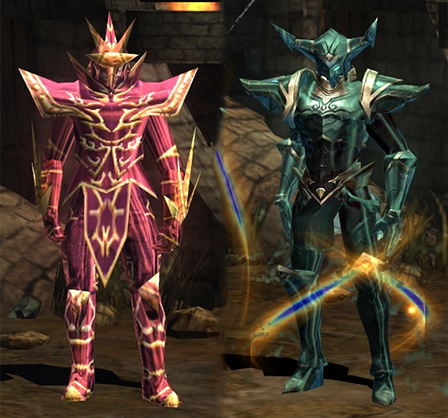 New update is out! All players need to auto-update via Launcher. To get the auto-update, close the game, close the Launcher and start it again. If you have problems with an auto-update, you can manually download and install Patcher, it must be unpacked in the folder with the game client, replacing all of the suggested files. During the update, all game windows should be closed.

New item mixes in the Chaos Machine, which, by analogy with Dragonbone Blade, have their own unique options. When created, items retain all additional options and improvements of the original item, but there is a 30% chance that the item will lose from 1 to 3 upgrade levels.

Heaven's Divider - Every second comes without penalty - every time you kill someone there is a 50% chance that your PK status will not increase.

All recipes and parameters for new items can be explored in our library .

A new section of special crafts added to the craft system on the website. One item is created out of three, but it will require additional resources, such as expensive jewels and feathers. The chance of successful craft is 90% instead of the usual 50%.

Dark Scale Set - created from parts of the Scale set. Each item has an additional option Reflect Damage + 1%.

Antique Soul Set - created from parts of the Grand Soul set. Each item has an additional option: Max Mana Shield Absorb + 1%. With full set you will exceed the maximum absorbency of Mana Shield from 30% to 35%. And of course the old-school glow of the set from the 97th version, the oldies will understand.

Non-Excellent versions of top weapons added to the craft system on the website: Obsidian Blade, Staff of Atlantis, Demon Hunter's Crossbow, Saber of Atlantis and Scepter of Atlantis.

The formula for the SD Recovery skill for elves has been changed, the influence of the Mana parameter has been added, the new formula looks like this: SD Amount Recovered = Energy / 16 + Mana / 16. The amount of regenerated SD will also be affected by the percentage of Buff Power Rise from Wands.

More adjustments to Red Dragon Invasion. The event now works like this: at the appointed time in the specified location, 15 red dragons appear in random locations throughout the map. If you kill these dragons, then after 30 seconds each killed dragon will appear again on the same map, but at new coordinates. The event lasts 5 minutes, while red dragons fly across the sky. The faster players hunt them, the greater the total amount of their respawns will be.

Minimum points required to get access to Kanturu Arena on the Kanturu Domination event increased from 1000 to 2000.

Improved additional options when upgrading weapons to +15. Now the additional damage adds a percentage according to the Grade / 50 formula and the result can be with two decimal places, for example, Lightning Sword now gives + 1.92% Increase Physical and Wizardry Damage, and Night's Edge is already 3.20%. The minimum increase cannot be less than one percent. Now the differences in grade between the guns will be more noticeable.

Requirements for top items reworked, in general, now you need more stats overall, but at the same time, for example, Strength requirements for staff and the Energy requirements for gladiator swords have been reduced. Increased the Durability of all daggers. Due to the changes of Wizardry Damage% rise calculation, this parameter on all staffs has increased by about 1-5%.

We now have a new weapon type - Wands. These are staffs for elves that increase Buff Power: Heal, Damage, Defense, Ragefull Strikes, and SD Recovery. These include: Apprentice Wand, Yearning Wand, Elemental Wand, Frost Wand, Devilwood Branch, Totem Dragon Wand, and Sleepwalker. When upgraded to + 14 + 15 Wands significantly increase the Mana parameter. The percentages on these items are not yet final and will be adjusted in the upcoming weeks along with the formulas for calculating the buffs themselves.

New recipes for low-tier weapons craft on the website:

Nightmare in Kanturu can now drop the unique two-handed sword Nightmare's Bane, which increases all damage done by 10% while in Kanturu.

All these items have already been added to the lottery and the game drop, and their characteristics can be found in our library.

The distribution of players into teams on Team Deathmatch event has been completely redesigned. We tried to make the team composition as balanced as possible so that the number of people, classes, and TDM levels coincided. The first results of the daily event are encouraging.

We have studied the statistics of quests and found out on which quests players get stuck most often. In connection with these, the number of monsters in tasks has been reduced: 183 - Dark Elf, 200 - Death King, and 220 Relics of Kundun.

Time of Golden Invasion has been moved to XX: 15. Reduced Mana consumption by the Firescream skill, perhaps this will affect the bug with abnormal bottle consumption.

In the second part of the update, we will add new mixes to Chaos Machine for items upgrade and expand the capabilities of the craft system on the website.

A new zone, Kanturu Arena 2, has been added and access will be raffled off at the Kanturu Domination afternoon event. There are two Twin Tail spots and a Soldier drop monster at the location. It is impossible to own both locations at the same time, they are replaced with each other in case of winning, just like the buff. Guild that ranked first at the main KA Domination event on the previous day will not be able to participate in the secondary event the next day.

The principle of distribution of teams on Team Deathmatch has been updated. Character classes are no longer taken into account, teams are now distributed exclusively by TDM level from higher to lower on the basis of the first-second principle.

You can no longer teleport out of the Endless Tower event, you need to wait for the event to end automatically. This should reduce the incidence of broken stats and other annoying issues.

In Bless Arena, the combat cursor mode now depends on where your target is, not your character. Now being in the PvP zone and aiming the cursor at the players on the spots, the cursor will be neutral. This will solve the problems with spontaneous kills on AFK.
Author: BeL4eNaKComments: 5
Back12345Next